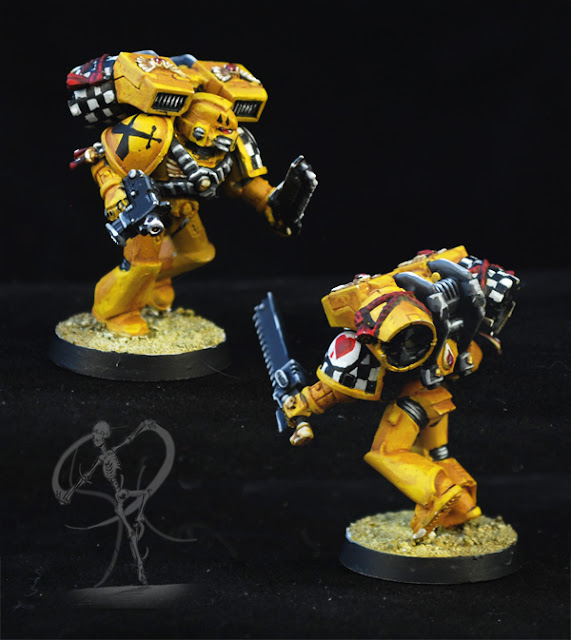 Okay, seriously- I think I need to stop at three Power Armor armies.

So, my test Lamenter. The freehand isn't perfect, but I think it's plenty good enough for a rank & file guy, and I'm happy that I managed to separate yellow from NMM gold.

Lamenters are just a lot of fun... their fluff has them being basically nice guys (as far as bloodthirsty super-soldiers go) but getting screwed constantly:

They're unlucky, and then they get a rep for it to the point where their allies abandon them to get wrecked in combat, then they finally get some friends, who end up being on the wrong side of a civil war with the Imperium, and they go on a crusade and end up in front of a Tyranid hive fleet, and finally, as some internet-goer astutely pointed out, GW ended the their universe's timeline a decade before the Lamenters would be allowed to start recruiting again.


I was originally going to have them be the jump allies to my Astral Claws, but in the new edition, Blood Angels lost their jump Troop slot, so I'm not really sure how to structure them any more.

So, dear reader, what would you suggest?

I'm going to be taking their chapter master who, like Gabriel Seth, is in the awkward position of being a melee character in an army with signature jump infantry but personally doesn't have a jump pack. How would you field a small allied force?
Posted by Nick at 10:33 AM