So, I decided to try painting up some Space marines I recently acquired, after the end to a long period of avoiding Games Workshop miniatures.

Hardly my first army*, Dark Angels were still my first playable army. So, I decided to try painting one again. 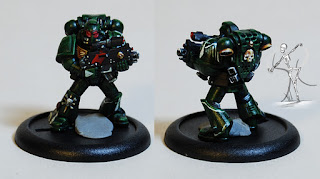 Starting out a new Game: Malifaux

ere begins my journey in to Malifaux.


Well, truth be told, that began when Wyrd Miniatures was still just a miniatures company, with no associated game. The original Pandora and Ramos miniatures, and several others were ones I had been eyeing as proxies for Warmachine for years. Eventually it was the combination of a few different factors, including pulling back on other hobby expenses and how nicely the game was shaping up to be, that led me to try out the game finally.

I was originally suckered in by the Arcanists and their steampunk* aesthetic, but Bartertown dictated that Resurrectionists were the starter faction.**

McMourning's mad doctor aesthetic meant I was curious, his Joker-esque look certainly didn't hurt. Reading Malifaux's (Malifaux'?) narrative had me enjoying his character even more, so the redhead became my first Master.

I was about to start off this post by saying something about "Normally, I don't say much political," but "normally" doesn't mean much yet, and, frankly, I imagine that I will be occasionally posting what I believe in, though I'll try to stick to topics relevant to the blog.

This was a fun conversion, and one of few times I've been asked to reproduce my own work.

Like many others, I thought that the Kara Sloan stock pose (right*) was static, at best. I personally am a huge fan of well done "at ease" poses, which is why I'm constantly impressed by the old Confrontation line.

* Seems there was some confusion about the stock photo, so I've added the least painted photo I could find of the stock pose, if someone has a clearer one, please let me know.

However, holding a rifle longer than she is tall, one handed, with the other on her hip, is not an interesting (or believable) pose. (Interestingly, the concept sketch shows with her in a very similar pose, but looking over her other shoulder, and the rifle on the ground, in a much more natural pose. The face is also nicer, but I imagine that's more to do with sculpting limitations than the poor pose.)

The obvious modification was to make something like her artwork (right), which took some careful cutting and was one of the first attempts I made to do thoroughly mechanical details.

I was quite happy with how the model came out (as were my clients), but, were I to do it again, I'd definitely apply what I've learned about making scale rivits (more on that in another post).

I think that this conversion, while not perfect, is one of the more effective conversions for the time it took of any I've done.

A more elaborate conversion I've considered is as follows:

-completely remove/resculpt both shoulders, to drop her stance slightly.
- lean her head in to the gun slightly (to give the look of taking a shot, instead of either just having shot or scoping out a new target)
-the addition of a bipod or monopod might be in order

However, I pride myself in affordable prices, so I didn't do the extra steps for the commissions, as I don't feel it's worth the time and associated cost to my clients- this would likely be a personal project instead.

This was a fun little commission-- my favorite type of commissions are actually single pieces (there's no way they get repetitive).

Raging Heroes is a small company that does some nice minis, but this is the first of theirs that I've painted. The pose was decent (reminiscent of late 80's miniatures poses) but with some very nice detail, especially for how delicate the parts were. I also appreciate how a few different pieces allowed it to fit in two separate lines.

On the commission itself, it was pretty open-ended- essentially, purple armor and orange hair & tassels, and something like the studio paint job. I added some dark red to the cloth to distinguish it from the purple armor, while avoiding making it distract from the rest by adding too much contrast. The green details were to oppose the purple, and even more importantly, so the bright orange wasn't the only bright spot on the model.

I did some of the highest contrast highlights I've done on this, to accentuate the already sharp edges.

The client is going to do their own thing with the base, so this is just temporary, but I think that the wider base does something good for the cloth, accentuating the flow, rather than the sleeves just hanging out over space.

But, enough words, here's the mini:

Before starting this, I normally try to avoid disclaimers, but, simply, I have way more to say about this than what you want to hear. I've edited this down to what I believe are the core points: this isn't comprehensive- it's two case studies.

The concept of selling out does not usually come up (at least, from my experience) in conversations about miniatures companies. After all, they're there to sell you things, so there's no way to "sell out," is there, right?