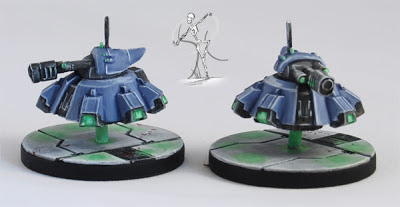 
I had a pretty good time painting these guys up.

I mostly stuck by the plan, but chose to do the characters separately, because they're very nice sculpts, and I wanted to give them a better treatment than the rank and file.


A quick review of the minis...
The materials for Sedition Wars isn't my favorite-- some elements needed to be cut, a number needed to be heated and bent, and the plastic itself tends to shred slightly when filed or cut. If this isn't the same stuff that Privateer Press uses, it's very similar.

The mold quality was only decent, too. The details aren't quite as sharp as Games Workshop's, but the biggest problem I had was the immense number of mold lines. There are some single piece models that look like they were 4-6 piece molds. While this speaks to a high standard of detail and reproduction (and technical ability), it meant that, combined with the material's limitations, some of the models were incredibly frustrating to clean. This frustration was compounded by the fact that the mold components seemed set up only based on detail and not on cleaning: every model has mold lines that go over some texture that you either need to clean incredibly carefully or damage.

The sculpts, themselves, are very good. While there are a few I don't like the style of, there's nothing I can complain about, regarding technical ability. While my complaints above are much longer, this offsets most of my complaints. They're very good models-- the best in any board game I've seen, and above average for miniature games. Also, while layered, they were pretty fast to paint.

The last note is, I do have a bit of a complaint about the models' lack of variety. The Strain have a number of organic (or, organic-looking) models that have identical poses: zombies, spike guys, giant maws, etc. When you have nine of the same zombie, it starts to look like a dance troupe and not creeping horror. It isn't as bad with the Vanguard, since they're a military force, Studio McVey does have extra infantry models sculpted, that they didn't cast. Similarly, while there are six different small base designs, there is only one for the ten large models in the Biohazard set. This lack of variety is probably the thing that makes Sedition Wars feel most like a board game.

... And, back to the painting
Well, I went over the limitations and advantages to the sculpts, but I found the minis really fun to paint. They have the right amount of utilitarian tech that they fit just as well with a clean sci-fi color scheme as with a more military one. If I were to paint a second batch, I'd probably base them on GW's old Cadian line, to give more of an Aliens feel.

Finally, the big picture. This is the most of the same basic infantry I've painted at once, and I'm pretty happy with them. 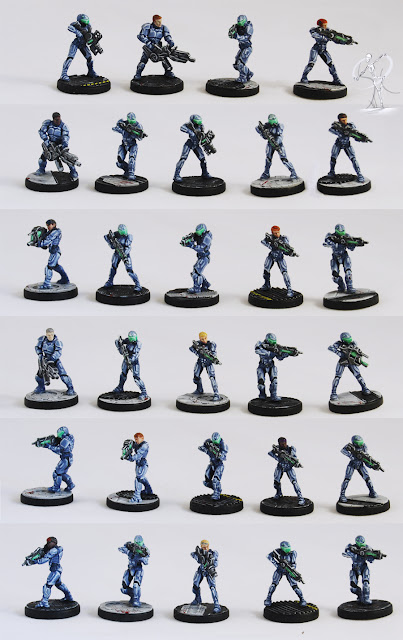