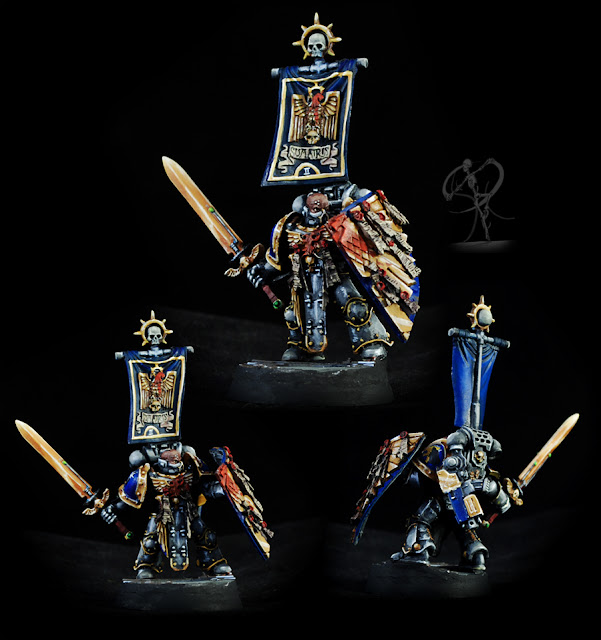 My kitbash for Captain Corien Sumatris is one of my favorite Space marine models.

Because of that, his revision saw very little change, other than to match him with my more recent models' base style, and the 32mm bases I've grown to accept while I was at it. Really hoping this guy stays in a good place when Forge World updates his rules, but if they're trash then I can at least use him as a regular old captain without too much fuss. 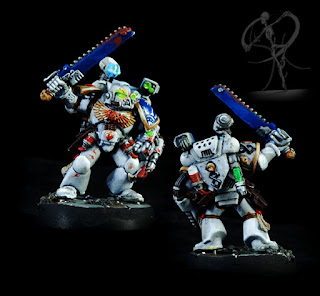 As I'm looking at 8th edition, I like the Apothecary getting to be a (surprisingly tough) character. I think he should have been given some basic wargear access, but it doesn't particularly matter, since he's not really a front-liner. 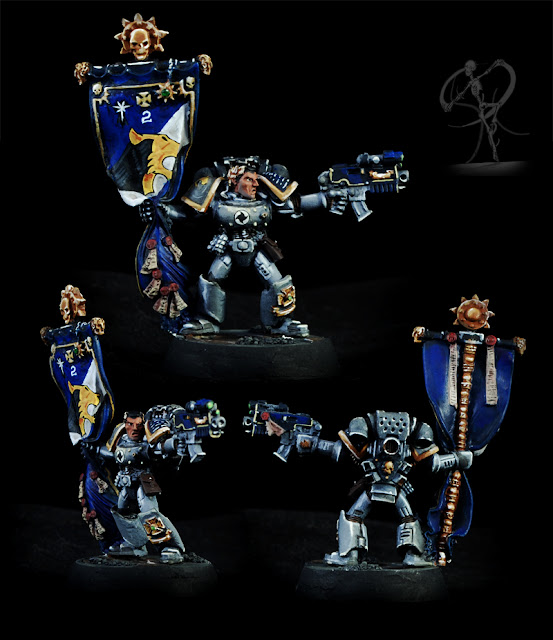 The Ancients (that would be the old and now revived term for Standard Bearer), too, are pretty cool dudes, in their upgraded form, and their new role is a pretty interesting one. I could very easily see an Ancient as a good rallying point for a more massed infantry force, which, of course, fits his theme pretty well.

This guy saw the most dramatic revision for my existing command squad guys: I didn't like his old banner design, so scrapped it entirely. This one is less elaborate, but I think a lot bolder, and I'm a lot happier with it. Bonus points for anyone who recognizes where this guy came from-- his standard looks kinda' dinky by modern standards (ugh, sorry, not intended), but I like the general sensibility pretty well.

I thought the Company Veterans fared the poorest. They're rather pricey for what amount to bodyguards, where they went from a few options (like storm shields to more effectively soak damage) to really only useful as vanilla troops with no upgrades, since their only role is to die. With the plethora of elites options available to Marines, I feel like there's very little reason to take these guys, when a small unit takes up a valuable slot. Unless I'm misjudging character vulnerability (in which case they might be useful as a completely un-upgraded unit), I can't see them as valuable outside of a very cheap way to fill out an Elites slot. 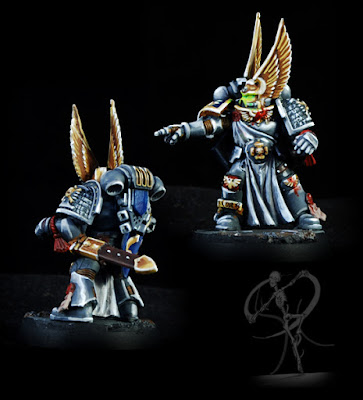 The Company Champion is the only completely new mini I've worked on in this set. I thought it was a good use of a Dark Angels' spiffy helmet (recalling their hinted relationship), and a pretty fun mix of parts, including incorporating the Deathwatch heraldry (left shoulder, and right knee's company marking), and that a Champion was an appropriate sort who might have served in the Deathwatch, despite the arm not being as dramatic on an already grey/silver guy.

As with the other two command squad characters (three, for those of you who remember Techmarines were also part of it), I'm pretty happy with how the face lift looks on paper.
Posted by Nick at 9:52 AM