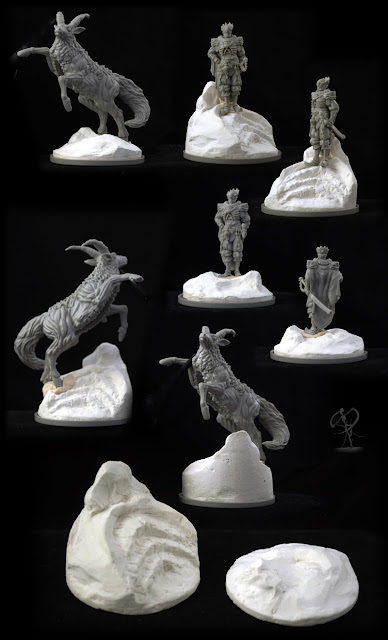 Some more sculpting and casting, today.


The base inserts were fun- I'd originally designed the teeth stairs as just for the Hand, but decided that, once I saw how well the Antelope fit on it, that I'd like to start casting that variant, too.

The pillar was designed with a 2-cast mold in mind, but without the intention that I'd naturally hit that right on my first try. It actually came remarkably close, though. 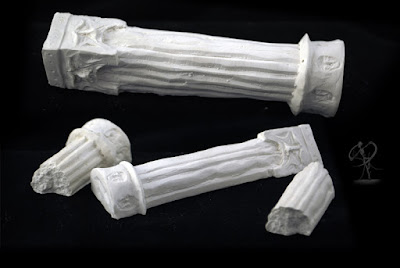 The problem I learned with larger molds, though, is that they'll warp a little: the bases are close enough to fitting that I'm happy (a touch small), but until I figure out how to properly support the pillar's mold, it pinches a little, which means two of them are way thicker back to back than they are wide, so the pillar's cross-section looks like an oval rather than a square. Fortunately, like I said, I'd designed the pillar to work as a single piece mold with the rest as a bonus, so it still looks nice flat.

I've managed to get my plaster consistency right, and now I've gotten rid of bubbles interfering with details, so one more step along the learning curve.

On to Mount Rushmore's settlement years...

Year 13
The convergence of some crazy stuff: the Knight came back to teach us kids a lesson (how to hit harder on perfect hits); our veterans told a story, unlocking a Legendary fight, and then the Hand turned up like he said he would.

Oh, and somewhere in there we completed our lion gear set, so we now had three complete set bonuses and could retire our Bone build (our fourth set is a hodgepodge that's more flexible to build around), and finally invented cooking. Not sure what we were doing about food before.

Hirl, the oldest alive of the Manzi family, got within two understanding of completing it, which we're hoping to hit (so far, we've yet to hit any maximum experience stats).

We then sent a newb party to fight the next scary horrible guy (having learned from our veterans getting slaughtered last Nemesis not to do that again), with the good wishes of our Shrine.

We figured out the strategy for this fight after not too long, and managed to barely scrape by with one survivor. We coulda' done it with 2-3 Survivors if we'd been a turn smarter or marginally more lucky. Damn.

Well, nemeses are jerks. We didn't feel he was as bad as the King's Man, at least.

Year 14
The Hand, on leaving, would have killed one of our veterans, but we used our house rule again*. After that grueling mess, we got hit with a plague. Fortunately, we managed to get by without any deaths.

*Keeping track, this is now 5 uses of at least 7 opportunities.

While we were treating people, we invented beds and had three kids, meaning we managed to compensate for the last year's nemesis, so at least we didn't lose anything. Actually, we gained a little because Piantissimo 3 (again, no relation) actually survived his first fight and kinda' freaked out, gaining a bunch of abilities from fighting the Hand. Just no resources.

We thought about it a bit, and decided to send our relatively powerful but short-lived Saviors against the Phoenix, since they're in a position of useful but expendable so seemed like a good match-up against something strong but unknown. Also, a couple newbs.

Turned out we'd been over-conservative in waiting this long. While the Phoenix had some very unusual means of attack (leaving it at that to avoid spoilers...), we trounced it pretty well and thoroughly, with only one of our Survivors ever getting in danger of death.

We should have probably run into it earlier, since knowing how it fought could have dictated some of our choices at this stage, and we could have theoretically fought it something like 7 years earlier.

We also came to the conclusion that (based on 6 monster types, now) that Nemesis fights and Monster Hunts are two very different ways of fighting. The Hunts tend to be more conventional "wreck them before they wreck you" affairs of doing damage and avoiding getting hit, while the Nemeses are much more about understanding how they fight and how to counter it. I guess that makes sense, since it's the difference between an animal and a (creepy, oversized) person.

Year 15
We actually had a 100% beneficial, no chances of something horrible happening, random event! Those are few and far between. We ended up with some cool Endeavor options and buffs to all rolls. We were a little disappointed no one had died, since we'd have gotten more buffed events then. We got another green Savior, which was nice because our current generation of them only had one fight left in each.

Getting Phoenix resources also got us the Plumery, for makin' Phoenix parts into Phoenix gear, and we had enough to make one bit of armor (bird gear is, to use the Portland colloquialism, spendy).

We also got our first full-Understanding Survivor, who got a magical insight that made her super-dodgy if she doesn't wear armor (not that limiting, since shields don't count and our shrine can also produce pseudo-armor).

We tried our first Legendary fight this year (unlocked it a few years back), and fought a Beast of Sorrow.

The build we've been fine-tuning of two tank-ish Survivors, one manipulation Survivor, and one berserk damage dealer, functioned exceptionally well. No one came close to dying, and we got a ton of resources- with a little luck, we got close to triple a basic encounter's worth.

Note: We fudged the game in this hunt. The first thing we drew was the lion backing off of the board. Unless we misunderstood things, given the number of cards you draw, there's about a 50/50 chance this would happen in any level 3+ hunt.

Monsters moving off the board do not trigger Starvation. They're in an imaginary extra space. If they move back or otherwise engage, gravy. If not, you still go through the whole Hunt path until you hit Starvation. (This also makes Run Away in the Hunt phase actually do something meaningful.)

If this is intentional, we think it's dumb. Those odds are extremely high of just losing a hunt year, and there are fairly few in a campaign so it's really not worth hunting something more than twice as tough for a statistically similar amount of resources. And it's just not very fun: Losing half the time before the game starts, when you have a limited number of games, is not an entertaining risk, since it discourages going after tougher fights.

Year 16
Well, we got a glut of resources, but didn't actually need much specifically. So, with another Nemesis coming up, we built a whole bunch of defensive gear since they're so destructive.

We also had another three kids, including one super kid due to good rolling and the right parenting- he ended up with 2 experience buffs and a whopping 5 stat buffs!

We then went in to fight the scary, scary Hand for the second time.

We managed no deaths during the fight, then lost two to random stuff...

Year 17
...And then there was a plague, so we lost a little ground over the course of the year, spending all our activities curing the sick. But the Twilight Knight also returned and gave one of our newbs another Twilight Sword. Beak had bonus accuracy, so it should be a little less painful getting the sword synched.

Huh. I just realized we got the plague both times we fought the Hand. Social commentary? Biological weaponry? Certainly not just a coincidence ;)

Then we fought a Phoenix again, and got a really pain-in-the-ass passive condition that meant we were pretty constantly getting disabled. We ended up getting pretty beat up by the end of the fight (certainly more than the first time), but nothing awful happened. We also started training our new Twilight swordsman.


Thoughts
I think we were a little too conservative in the years immediately following the Butcher (mostly the sessions immediately preceding this report). We probably could have started taking on level 2 Lions around the time we got Dash, and we were a little muddled with the Antelope gear: Other than the hat and katars, we didn't get much out of it despite fighting it a few times.

We also just figured out how resource gathering tools worked, and not getting those sooner definitely cost us some momentum.

I think there's little chance we won't get to the boss, but we've only barely broken into the Phoenix gear and haven't even approached the Lantern set. So, it's a question of how much of a jump in power either of those are, and whether they're bonus stuff or what you should really be focusing on earlier. The Phoenix set only looks substantially more impressive than what we have when it's a complete set, though, and we've already learned that actually moving in a straight line is often harder than it looks.