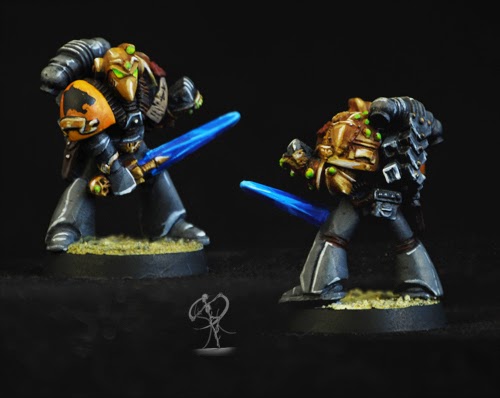 
I had a few old Rogue Trader minis floating around that I didn't know what to do with, but, then the perfect theme hit me, and the Tiger Claws contingent of my Astral Claws was born.

For those of you who aren't familiar with the ret-con, somewhere along the way, the Tiger Claws were renamed Astral Claws, I believe around the time that Huron got a short story written about him and became more than a throwaway concept in the first Codex Chaos or a WD article designed to encourage you to paint your beakies in horrible colors.

When Forge World got their hands on the Badab War, one of their many smart salvaging jobs was to turn the Tiger Claws into an Astral Claws successor chapter, in black with orange pauldrons (rather than orange with other orange stripes.

They were absorbed into the Astral Claws, with their heraldry erased (with lots of implications around the beginning of the ACs' downfall beginning here... also, they gave Huron his super claw).

When adapting this to the table, I decided that it was neither fitting for them to just look like RT Astral Claws nor for them to be in their original colors (either of them), since they would stick out like a sore thumb.

Instead, they got the same paint job as the regular Claws, but with their original heraldry (and, where it fit, the Tyrant's Claw and other AC markings).

The above Rogue Trader Lieutenant Commander changed jobs since his old one didn't exist: in small games, he might get to be a Captain, but most of the time he'll serve as the Company Champion. I thought that the cool armor on his left arm would be an interesting way to represent the combat shield. 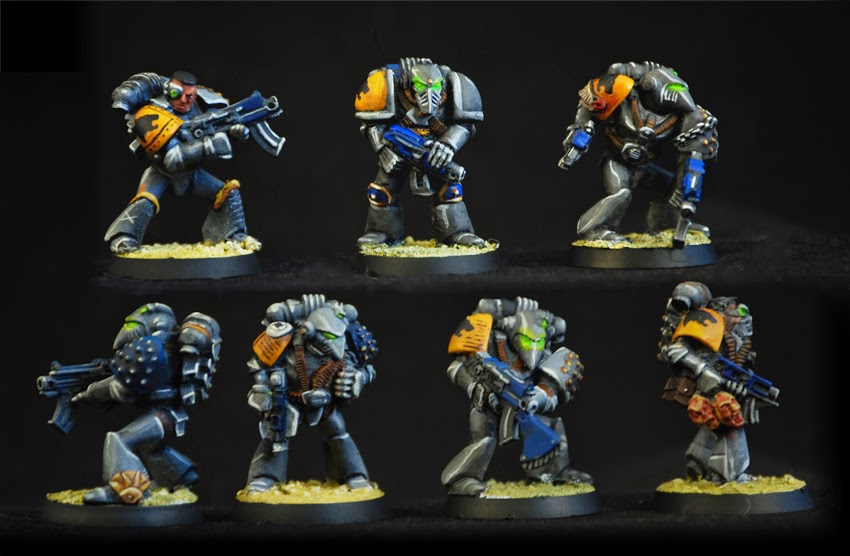 He also brought along some of his rank & file RT buddies. I did some conversion work on the plastics, to make them stand up a bit more, and to give them some more detailing for variety (like the bottom left's ankle detailing or the top right's chain and purity seal).

I'll plan on mixing these guys in with my regular Marines, hoping to eventually get a mix of about 1:3 RT:Current.

Oh, and, yes, I realize Summatris is Tiger Claws, but, being a Captain, it seems like it was probably time for him to get the Astral Claws treatment (I'd considered the above LC as a basis for Summatris, but decided he wasn't nearly badass enough).
Posted by Nick at 9:39 AM