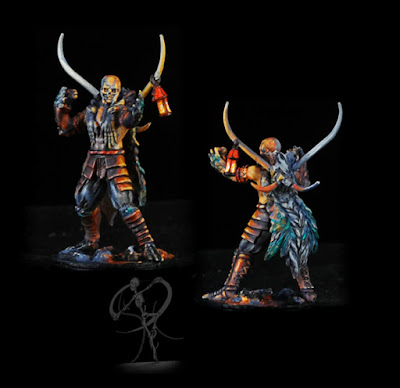 The Brawler armor is one of my favorite little survivor kitbashes. The only actual cutting and sculpting was from adding the crest/rack thing to his back and adding a little musculature around his shoulders so he didn't look like a doll/action figure. However, I felt like I hit the right place with the slightly back-leaning upright boxing pose, that looks just a bit unnatural, despite being the best way to box.
My group is pretty much always running a Fist and Tooth specialist for the first half of the campaign, and normally it doesn't really matter to have a model for him (or her), since he'll have some other weapon when not getting that one wound in.

However, the Brawler armor was a perfect excuse to make a dedicated model to represent him. We use this guy as a reminder that they should be F+T training, and besides, I think he looks pretty badass, which is fun since Fist and Tooth duty tends not to be the most glamorous in a fight. 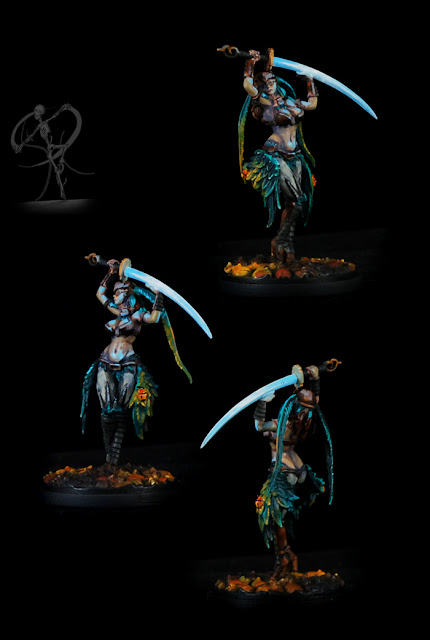 I don't have the same love for katanas, but thought that the Lion Knight set's Dancer armor was clearly pretty close to the Phoenix Dancer pinup, which is a model I liked a fair bit, so this went without modification. I played with the same effect I did on my male katana survivor, though quite a bit more pronounced since the sword was fully drawn.

Oh, and she has light pants (that match the above Phoenix survivors), not miscolored legs. I might try to sculpt that a little clearer if I touch up this model in the future, since right now it's just a repaint.

Spamazonia Campaign, years 10.1-15
(continued from part 1 (including its modifications) and part 2)

Year 10.1
We fought a Gorm, getting its Pure Bulb strange resource off a crit, and getting close to getting that very nice club.

Year 11
Two different jerks showed up, killing two of our guys (I think that would be up to 12 of our 23 deaths due to events and 3 we sacrificed to game things; 8 due to nemeses), and draining our storage.

Note: we misread the Manhunter rules: in retrospect, we would have tried to fight him off. (Stay in school, kids!)

We then beat up another Gorm. Not much to report this fight.

Year 12
We came home to a rivalry, and managed to achieve our conviction (Barbaric, of course), without wrecking our settlement. And, we developed the ever-useful Clan of Death innovation. After conveniently having some twins with our new stat buffs (making them better than most of our under-statted vets), we then decided we were ready to try out a level 2 Gorm.

The fight went pretty smoothly (other than my fist and tooth dude not being able to roll above a 3 for anything, for 5 turns straight, including some surge attacks), getting lucky with a bunch of resources we'd been shooting for, and only a couple penalties from the more punishing Gorm encounter.

Year 13
We came home to a whole slew of things: The Gorm Climate started back up again (ugh). The Twilight Knight showed up to give our almost Fist and Tooth master a sword (not the worst... we knew it was a possibility). The Manhunter came to town and killed one of our worse survivors, giving us some more resources. We had a continued Rivalry that would last until next year.

Having taken care of things we were forced to roll, we then got a lovely Riot Mace, one of the nicest weapons we currently have available.

Finally, we needed to defend our town from the Hand, after getting two more shields and a little more armor. Turns out, decent survival, evasion, and a shield on everyone, combined with our continued inability to consistently roll above around a four meant that fight went really smoothly. I don't think anyone took damage.

Year 14
We'd actually remembered to save resources for innovation, and decided to work towards Gormchymy rather than the obvious tracks of Shrine or Smelting, since we were busy spending the whole campaign trying new things. Our survivors also continued their infighting, with no end in sight.

We'd gotten Gorm Climate again, so went to deal with it by fighting another level 2 (we actually wanted to try fighting a Sunstalker, but felt it more important to get this out of the way).

The Gorm fight was pretty rough... our Rawhide survivor lost the ability to use Survival before the fight, got early targeted and puked on for a severe head injury, which inevitably was a 1, which meant that we went for the quick kill rather than trying to game anything, since we'd lost that control. We did manage to get a ton of resources, though: I think we crit something like four resources off of it, and got some more from terrain.

MVP was definitely our club continually critting the Gorm for basic attacks.

Year 15
We got rid of Gorm Climate and Rivalry (after getting Fist and Tooth mastery, said dude finally lost his cool and then needed a time out... except no time outs for someone with a Burning Ambition), and let the Manhunter kill a newb since we'd need to fight a level 3 and didn't feel like dealing with that until seeing what one was like when we were scheduled to fight one. (Also, if we happened to lose to the next one, the Lottery wouldn't replenish, instead duplicating for no effect.)

We also got the "did you cheat?" settlement event, which has always confused us what counts as cheating: we've house ruled some stuff when we thought it didn't make sense, and forgotten (to our benefit and detriment) to play rules, but think that "cheating" is changing an outcome or intentionally misplaying a rule for advantage, which we hadn't done. Either way, we got the padding from the event.

We special innovated the last Gormchymy, and got Gormite on our second roll, and realized a bit later when sorting through our storage list that we got our Handed Skull after everything got purged by the Hand earlier, so were able to make a Black Sword immediately!

We then got Storytelling because, despite my protests, the group didn't want to go for Scrap Smelting and all it offers (i.e. Beacon Shields and maybe other things), for the second or third time now, because it was too reliable, and this is, I guess, our "experiment with stuff" run.

We fought the Sunstalker (at level 1), and went through one hell of a rough hunt, that made the fight a lot harder than it needed to be. One guy got a disorder that meant he couldn't use his weapon after this fight(? the mechanic had different and unclear wording), and our Zero Presence (always in the blind spot) became Honorable (can't attack from the blind spot).

...So, that was dumb. But, it was a fun fight and we got a bunch of resources (despite none being particularly good). Oh, also, we hit shield mastery!
Posted by Nick at 10:02 AM