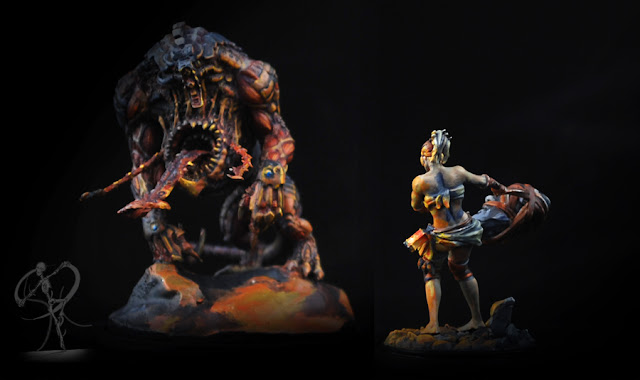 So, I really liked Kara Black's crossover model for Kingdom Death, enough that I wanted to do something special with her scenario, in part because I'd spent so much time with Sedition Wars. 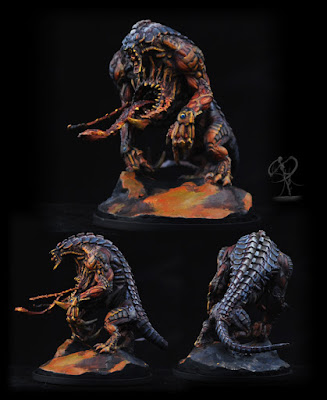 I dunno if it was intended as a reference or was just a coincidence, but the "silver antelope" kara fights, with a big old maw to eat guys and an aggressive blender of a trap, sounded like the Sedition Wars Grendlr, or how cave men in a horror landscape might conceive of it.

So, I did some minor conversions to my spare one and painted him in a Kingdom Death palate. Instead of making him all glowy, I went with a pretty organic, flesh and bone look, and turned the lenses on his wrists into eyes, in a little homage to Del Toro's aesthetic. 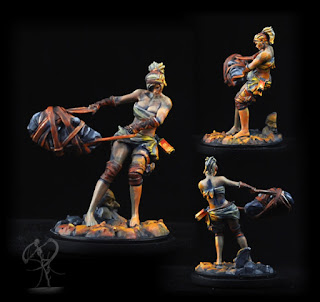 And Kara Black with her giant face. I think she's probably the most badass/tough mostly nekkid lady sculpt I've encountered. I feel like she's all business- part of why I wanted to do something special with her encounter.

In other news, a couple disappointments from the gaming end of things. Sedition Wars is apparently officially on the back burner, and the scenario beta these minis were for are also going back to the drawing board. Well, the rules are still out there, at least.
Posted by Nick at 12:01 PM