Everybody Knows that the Bird is the Word - Codenames Review 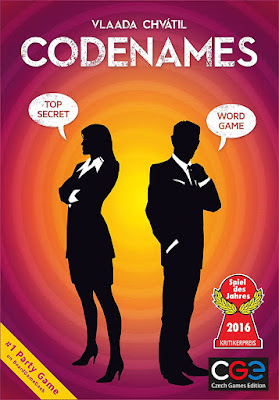 I don't like "party games." I don't like yelling (or buzzers), interruptions, timers, or social stuff relying on poor information or hidden teams. That certainly doesn't mean I don't like having a good time in a social situation, and there are still plenty of times where I like things that become those things*, but what it actually comes down to is that I hate when those elements are essential to the game rules or the inevitable outcome, because I don't really like things that are that high energy.

So, when I had Codenames described to me as something along the lines of "There's lots of yelling and guessing who's the spy, and who doesn't like party games?!" I was skeptical, to say the least.  It basically sounded like the least enjoyable parts (most parts) of Taboo, Pictionary, and Bang!, rolled in to one mess, maybe with some Apples to Apples mixed in, where I'd tolerate a few rounds and then beg off.

Fortunately, that turned out to be a poor description of Codenames and, despite any reservations, in a few rounds, it became my favorite light-weight guessing game, which isn't saying a lot, but the fact that I actually bought a copy the next week does.

Given the game's popularity, I expect that party gamers are well aware of the game, but this strays well outside my normal interests and reviews as mostly a fan of strategy games and thematic games/RPGs, so is worth a review from a different perspective.


* Well, no, I pretty much always hate timers, except maybe if they're perfectly implemented like in some video games. ...And I'm not sure I've ever played a game where a buzzer improved the experience.

Like Taboo**, the spymaster (person giving the clues) can't say any iteration of the codename (word) they're trying to get their operative(s) (teammates) to guess. The game also comes with a timer, though our rented copy didn't have one.

Unlike Taboo, well, I guess that would be everything else, which is what makes this game enjoyable to me.

** Picked as the most well-known of this genre.

The game has a randomized set of 25 word cards (picked from a huge and double-sided deck), all of which are nouns***, and a card that the two spymasters see, which dictates who will score off of a given word being guessed, and the goal of the game is to have the operatives properly guess their team's words, where a team wins either by guessing all of their words (8 or 9), or if the other team is eliminated by guessing the "assassin" word.

*** Many of which can be other parts of speech, and there are a few proper nouns, all of which I believe are places. 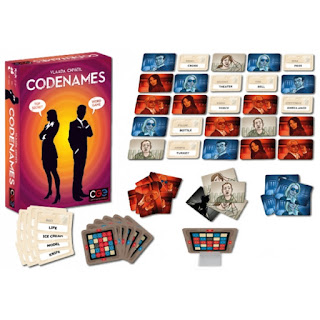 Each turn, the team's spymaster says a single word (with a fairly comprehensive list of ways you can't abuse the system, and a nice clause about not being a hard-liner) and the number of words in play that are related to the clue they gave, interpreted however it might be- for instance "sitting" could refer to specific use (chair), maybe an association (bus), or a turn of phrase (duck). Similarly, if the spymaster wanted their teammates to call "duck" in combination with other words, they might say "nature," "water," "dodge," etc., as a good many words have many meanings, and the rest tend to have many associations. the words are guessed in sequence, until the operatives get one wrong, choose to stop, or reach the number suggest (after which, they're allowed one final guess, to compensate for an earlier miss or if they're feeling particularly lucky.

Where much of the skill comes in is in combos. It's usually pretty straightforward to link two ideas to one clue, and chances are you'll start with at least a couple obvious ones. However, as a race, you can be rewarded by making cleverer alternative meanings that manage to cover three or more options, by calling in to use more versatile meanings. In contrast, there are also a number of times when extreme specificity might be the name of the game: for instance, you could have four words that could be easily interpreted as celebrity, but an obvious one that isn't yours so would end the turn early, or an unlikely but possible losing "assassin" tile might share the theme, in which case, you might look for a more precise word or you might give up on that angle and combine ideas with other goal words. Sometimes you've got a precise phrase, sometimes it's about getting some rough approximation that the operative thinks the spymaster is trying to make them guess, sometimes someone just over-thinks it or there's one bad clue that makes both sides cautious and confused throughout the rest of the round.

What it adds up to is essentially a light-weight skill-based language and guessing game. Very often, it's about trying to figure out exact uses of words, judging your teammates' vocabulary, mindset, interests, and how much of a stretch the association is.

I've realized something about many more social games that have a larger element of chance or guessing in them: the shorter the game is, the more likely I am to enjoy a game with simple mechanics. Betrayal at the House on the Hill is pretty darn fast; Wits and Wagers only has seven(?) rounds; Lost Legacy is tiny in scope and material; Silver Tower has fast sessions (most of the time)- they're games I like despite rather simple design. Monopoly; Risk; MYTH. These are all games I find horrible, and I think part of my inability to forgive them is simply that they're long, so any frustration builds up as it keeps impacting the experience.

Back to the point. Codenames turns (at least in my group) tend to be on the long side, but the time it takes to play out a whole "hand" is still pretty brief (usually under 8 turns). We usually sit down and end up playing several hands' worth. This keeps the pace up, makes any team dynamic issues (i.e. bad communication causing you to fall behind) brief, and it's easy to find a stopping point if someone's tired of it. I believe Codenames takes full advantage of its brevity.


Player count
Codenames can be played with up to eight players. With four or more, it's really easy: divide into teams; if uneven, one will have a slight advantage in having more brains behind the guessing.

With three players, the two spymasters compete over their ability to communicate to a neutral operative. With two players, the game becomes a fully cooperative race against the clock, with a countdown that would be easy to beat, so it (hopefully) becomes a matter of score rather than success. Solo is, of course, impossible in a game based on communication and hidden information.

As an aside, there's also a mostly 2-player version of this game (Codenames Duet), that apparently changes it to a full co-op structure. I haven't played it or (going further onto a tangent) the other themed variations (innuendo, branded trivia, etc.), but the only one that looks promisingly different is the image-based equivalent that features some rather abstract and/or absurd combined images that look like they'd fulfill a similar but distinct role to the original's words with many associations.

Note: this game is available in a ton of languages (and I think it would be a great one for practicing with a new language), and the rules are available for free to preview on their site (Link).

Theme and Art
This game's theme entirely consists of a loose excuse for the game mechanics/naming scheme, and a half-dozen cute little drawings on cards etc.

The spy theme is basically nonexistent. This isn't to complain about it at all (while I prefer thematic games, I'm happy playing anything from sprawling epics on the table to cold, dry mechanics, if it's a good game), just warning anyone who thinks they're getting an immersive world or anything like that.

The art is, eh, okay. It's got a decent enough variety of characters to feel like they made an attempt at inclusivity, and there's nothing very immersive about the art that goes beyond the minimal narrative theme. Nothing intrusive nor exciting, but, again, I don't particularly feel it's the point. The two different weights of text on the cards you spend most of the game staring at can be distracting.

Also part of the presentation, FWIW, the game box is about double the size it needs to be. One of those cases where I guess they'd rather have it look larger on the shelf than be a compact game that could look small.


Replay Value
The number of combinations are vast, and the skills, other than a minimal amount of tactics involved in observation and choice, are essentially a matter of linguistic cleverness. The mechanics would probably take a couple minutes to learn, and the mechanics are basically just support for the real challenge. I honestly have a hard time deciphering what poor replay value would look like, here. I think it's more just a question of if, and how much, your group likes language games.


Strategy
I touched on this above, but there's a little. It's mostly how conservatively or aggressively you want to play, as the spymaster. There's a little bit of timing strategy, too, if you think your opponents might eliminate an option that makes your word choice hard or might stumble on one of yours. Also, of course, if you get a lead or fall behind, it will allow more, or less, conservative play. However, it's mostly just how good you are at wordplay and association.

There's definitely a bit of luck: occasionally it will be particularly easy or difficult to combo up words, but it's pretty remarkable how easy it is to get a baseline two.

There's one way I've seen the game able to be gamed: if a player makes a poor guess in an earlier round, instead of responding to a current round's clues, they can simply re-guess for the prior round, which I think is a kind of weird way to avoid the spirit of the game, but there's nothing I can think of that would stop this move.


Conclusion
Well, this has got to be one of my shortest reviews, but I guess that makes sense, given how straightforward the game is.

If you like puns, word association and wordplay, I'd highly recommend giving Codenames a try.

Oh, BTW, for anyone who got the title reference, the Trashmen music video is really weird. Look it up if you want to see something a little absurdist and experimental, or maybe just ridiculous and anachronistic (I don't know enough music video history to guess which).

Images are stock promo images or from the publicly available rulebook, and are not mine.
Posted by Nick at 1:32 PM