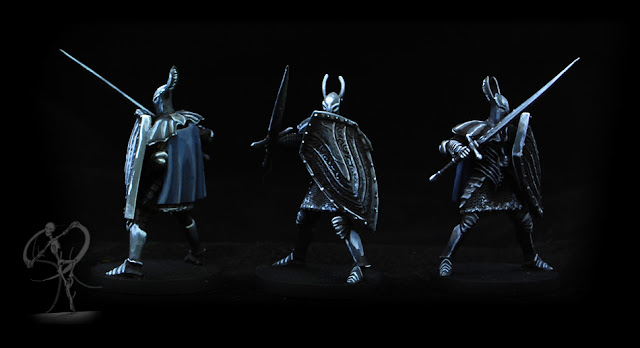 I really wanted to try to get some coldness into the Silver Knights, mostly to differentiate them from the other wholly-armored minis in the Dark Souls set, and to fit their apparently defining characteristic.

Unlike most of the others, I went with pure greys for their armor, rather than a warmer one with some browns mixed in. The blue-grey of their, uh, mini-capes (does anyone know what those are called?) tricks the eye into seeing coldness in the rest of the actually neutral grey.

The archers are just really awkward designs. A lot of this is on the original video game model, but I feel like having a static model makes it so much more easily noticeable how little these models make sense. They have these massive arrows that they're not holding up with anything; thick bows that are hugely top-heavy; no quivers (and if they had them, they'd need to be proportionally as huge as those arrows). Add to this that they're drawing back through their own leg, skirt, and helmet horns, and the design... ehh... It just kinda sucks. Which is too bad, since I like most of it other than the part where it makes no sense: if they'd made the bow just a big, ornamented bow, and given it a quiver, that would have solved most of the weird design.
Posted by Nick at 12:44 PM