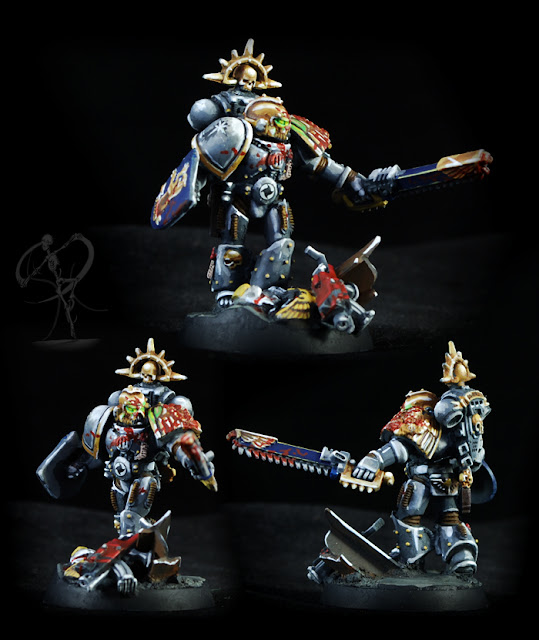 Okay, Commodus has been burdened with both some pretty awful mechanics and being named after an historical figure whose name looks like "toilet."

However, I liked the idea of a brutal commander, and mostly took it as an opportunity to convert a model, since the rules were poor enough that I expected I'd never buy one even if they made an official version.

He's a mix of a few different kits, where I tried to include a few gaudier bits, but focus on heavy, utilitarian armor aesthetics, so left him with a not very colorful paint job.

I normally am not a fan of serious blood splatter, but I felt that, given his rep as some sort of slaughterhouse with a complete lack of subtlety, I thought the blood felt right, and would help him stand out, if I ever actually fielded him.

Astral Claws
Also, a few notes on the 8th edition mechanics, now that Forge World's Index rules are out:


Chapter Tactics
Update: It's unclear whether Astral Claws are classified as a successor chapter, or whether FW will make chapter tactics down the line.

With no original legion, you're currently allowed to play them as any chapter due to successor rules- Ultramarines are technically correct as the only suggested vanilla legion; Salamanders and Ravenguard are the only obvious bad fluff options for representing how the ACs fight.
Tyrant's Legion

Okay, this army list has always been kind of terrible, except in its 5th edition iteration before the Allies system, where it was not great but at least allowed you to do field a style of army others couldn't.

It's a shame, since the new edition actually shored up a lot of the list's issues (including assault units with no assault vehicle, and other assault units with heavy weapons becoming viable options) assuming things stayed about the same.

It's pretty easy to play as a mix of Guard and Marines in 8th edition, even easier than the previous Allies of 6th & 7th, because Imperium is a keyword so you can mix and match units freely in a single detachment.

I think FW should have kept Retaliators (variant assault Marines), Corpse takers (variant apothecaries), Centurions (kinda' commissar marines), but basically everything else can be run easily using Marines or Guard and/or had no special modeling requirements.

You can basically run a unit of Retaliators through Company Veterans (if you really want those shields) or one of the various Assault Squads, but they're still missing key options. I'll probably eventually use mine as a basic foot Assault Squad.

I'd complain more, but there are certainly lists that got hit harder by FW, like Eldar Corsairs which were basically eliminated or Orks' unit entries that mysteriously disappeared. 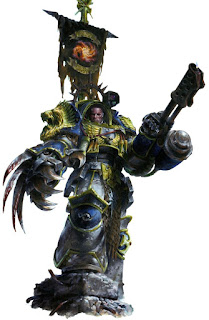 Characters
Well, the big man, Lugft Huron, has some pretty beastly offense. His claw is about the closest thing in the game to Mortal Wounds regarding saves without actually being MWs, with a -5 AP and re-roll successful invulnerables, now with more Strength and Damage (though they strangely lost the Lightning Claw re-roll wound rule). Speaking of Mortal Wounds, that's what his Orbital Bombardment does now. Also, his Heavy Flamer is now unique, meaning more Damage.

All-in-all, while he's not much tougher than a regular Terminator Captain for around 1.5x the price, he's got high offense, including the general hit re-roll aura he gives as a Chapter Master. Very pricey, but probably worth it. It'll take a while for me to graduate to large enough games that I feel comfortable fielding him to confirm this, though.

NB: there is errata so he now has Teleport Strike, like other Terminators, though unfortunately his Flamer doesn't have the range to attack if he does so. I guess that's a likely turn to use his Bombardment. 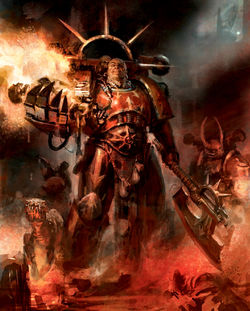 Speaking of Huron, a detour for a moment, to talk about his Red Corsairs incarnation. He continues
to not be very exciting. He's downgraded to regular Heavy Flamer (despite this one being his signature artifact) and his claw profile continues its edition schizophrenia due to an attempt to distinguish it from his Power Axe, back to being a generic power fist. He's basically just a Chaos Lord that makes people a little tougher instead of stronger (really, no idea how this fits his character), with some generic gear, because in all his looting the galaxy, the best he's got is a common (for Marines) melee weapon that's also a ranged weapon. Not strictly bad or overpriced, just bland.

(Note, the above is based on the Index iteration... no idea how this will change in their muddled Index/Codex 8th edition change over... seriously, I don't think this could have been more opaque and irritating if GW tried.)


Corien Sumatris, Huron's right-hand man, follows about the same pattern as his Chapter Master. The Captain is quite a bit pricier than a generic one with the same same gear would be, and most of what he gets for it is more offense. He's got what amounts to a Damage 2 Power Sword that gets buffs when he charges and buffs when he's near enemy characters. In short, he should be treated as a character hunter, though his attack rate (including 2 bolt pistol shots) makes him more than decent at clearing infantry.

Since they're both pricey and fill similar roles, I expect you'd never see both Huron and Sumatris in the same list unless you're in a really large game (IDK, 3k?), but I guess that makes sense, since Summatris is in charge when Huron isn't around. 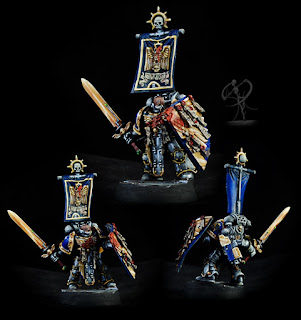 Oh, also, Sumatris is now explicitly an ex-Tiger Claw, rather than just heavily implied to be one.

Armenneus Valthex, the man with the electric jump ropes, is... pretty mediocre. You pay out the nose for an Assault 2 Conversion Beamer and a buff aura that makes Boltguns and Stormbolters Strength 5. His jump ropes aren't very good, which I don't mind unless FW thought it was a good reason for him to be expensive. I feel like he'll only be useful in a pile of vanilla Marines and equally-traditional generic Terminators. It's currently unclear if things like Twin Boltguns, Master-crafted Boltguns, or the Boltgun profile for Combi-weapons count as Boltguns for purposes of this buff.

Arch-Centuiron Carnac Commodus continues to have an awkward name and be bizarrely overpriced. For a bit more than the price of a Captain with a Power Sword, you get... a unique Chainsword which averages to be about as good as a Power Sword (swingier and better against multiwound guys that neither Captain nor Commodus are great at fighting), on a guy whose stats are notably worse than a Captain's (-1 BS, A, LD, inv sv), and flipping the re-roll from hit to wound, which is situationally more or less valuable than the standard (better if you're not hitting (ex: Flamers, ) or already have a re-roll; worse if you're using plasma; marginally worse on anything between). Sooo... highly situational offensive benefits over a Captain, for more than a Captain, with worse stats than one. That's not a combo I'd choose.

Also, he seems to have forgotten his Iron Halo wherever he left his legion of human conscripts he was bullying and his squads of enforcers he was rolling with.

Oh, and finally, to add insult to injury, yeah, Sumatris is way more expensive, but he also does a better job in the only area Commodus is better than a vanilla captain, as he's also strong at taking out characters.

Update: Now that Lieutenants are out, there's yet another comparison to make. The Lieutenant (comparing with similar wargear, of course) gets 1 fewer wound; no 5+ invulnerable save, again a very similar damage profile, and the same damage buff, for 21 fewer points. So, if you wanted that damage buff, you now have a cheaper and more flexible platform for it, at the cost of not-amazing defenses.

Sorry, Commodus, you're definitely never seeing the board now, well, unless as a proxy maybe.
Posted by Nick at 9:05 AM