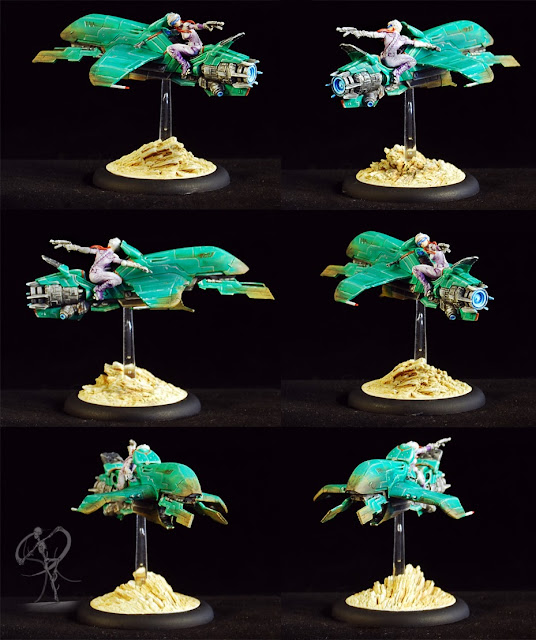 This mini really pushed my abilities. I started with teal, as what was going to be a reference, but it quickly became something more than that.

I normally stick to a more somber and/or monochromatic scheme, but as soon as I started putting down that teal, I got the endorphin rush of a bunch of ideas connecting. The palate here is based on a lot of late 80's/early 90's graphic novels, from when they were particularly loaded with colorists interested in color theory, and the sky was magenta, and the sea was puke green. Toning it back a bit and picking some of my favorites as references, I completed the model really quickly, by my standards at least, having expected it to be something I'd work on a little every so often over a couple weeks.

Oh, and like all SMV resin kits, it was a gorgeous model and great to work with. They do a great job casting, over there.

I was really tempted to go with a campy 3D font for this section, but decided something a bit more understated would be better with the brightness of the above pic.

It took me a bit, but I managed to figure out the formula for exploding 6's*, which took some more complex maths than I've done in a while, but got the numbers down. (The first column is just for comparative purposes, which mostly just shows that there's an increasing difference at higher numbers. Also, note that below 9 there aren't any differences because it's impossible to roll that low without the bonus from exploding dice.)

*For those of you not familiar with the concept, this is when every time you get a 6, you roll another die (which, in turn, can roll a 6, indefinitely).

Exploding rolls are noted with an asterisk below.

The major one is the comparison between 3d6 +3 vs. 4d6. This comes up when figuring out the value of Target Marking vs. Focusing, the second is focus firing with the melee penalty or into cover, vs. moving to get a shot without a penalty. In both cases, focusing is the better option at all but the lowest target rolls.

Also, up to needing an 8 to hit, there's nearly no difference in accuracy between focusing and not, while it quickly reaches and surpasses twice the accuracy.

I also calculated the probability of staging:

Probably the most important numbers here are staging 3 (which is where Revenants and Samaritans die to standard attacks, and where attacks start doing extra damage to big Strain beasties). It definitely isn't an insignificant number, but it's also barely changed by focusing, so, if staging is what you need to finish the job, you're not gaining much through focusing, especially compared to the 10~25 % bump in accuracy.

Another fun number this displays. The generally considered OP Cthonian will take an average of 53 focused Overload shots to kill.


Comparing Revenants (not focus) attacking a few different things (with their regular attack). Since Bleed is based on duration, factoring it in once. Applying average staging with reduction modifier (not perfectly accurate, but I couldn't figure out the way of combining the 2 sets of data).

Bleeding is similarly tricky, in that it depends on sequence. I subtracted 1 health from each model. This means that these are the numbers for killing a model in less than 2 full rounds.

Shields subtract one attack. Again, a slight abstraction, because you'd be aiming for a high staging attack, but figuring that out assumes a lot of things. I added the damage of one average hit to the model's health.

From this, you can determine the average number of attacks per kill, and from there, the number of points per hit, which basically shows you what kind of durability you're buying.


The big, anomalous number is Hurley. The combination of no staging reduction and a low defense makes Hurley a really soft target, compared to that high cost.

This doesn't reflect damage output, Drone creation, or healing (such as with Vade, or that heroes are more likely to survive to heal at a strategic point), but does give a pretty good representation of what's going on.

Edit: The Drones Hurley makes are now no longer dependent on Hurley to function, so that math is a bit less accurate. Still, though, Hurley has some serious durability issues.

Repeating with Strain, Samaritans targeting them. I decided against taking into account nano, because it's just too hard to assign a number to how likely you are to heal a model.

A couple notes: even though Samaritans are more likely to get focus attacks, than Revenants, this is still just a regular attack. Also, this is just checking regular attacks, not Overloads, because of the loss of reflex. The Cthonian has both non-fortified and fortified stats, for reference (the subtracted numbers are the average after rolls are capped at max damage- not perfectly accurate, but close).


Again, this doesn't take reflect damage output or the fact that downed Revenants will often just create more Revenants from nearby corpses or infecting and eventually killing models.

The first note is that the line troops, Samaritans and Revenants, have very similar value for their durability, while the bigger Strain creatures tend to be a little more fragile by cost than their Vanguard equivalents,including the comparison between Grendlr and Hurley.

EDIT: I hadn't noticed that the Grendlr had damage reduction. I re-did the math for it above. It's quite durable, actually.

The other thing to note is the Cthonian. Under normal conditions, it fits in very well, actually coming in at the median. With fortify, however, it's a complete outlier, at greater than five and a half times the durability of the next most durable model by cost. (This also shows the value of both focus attacks and Overload (shown above), which take less than a third as many attacks to kill a Cthonian.)

Comparatively, the difference between the next most durable model by cost vs. the least durable by cost is only 3. This does not perfectly represent the situation, again because factoring in the utility of nano and the value of sacrificed reflexes.

Edit: Thankfully, Fortify has been removed in errata.

Also, I miscalculated the Cthonian's durability: it's actually the highest still, though I didn't bother calculating how even more absurdly durable it was under Fortify.
Posted by Nick at 1:02 PM