Now the Darkness Got a Hold on Me - Huron Blackheart conversion 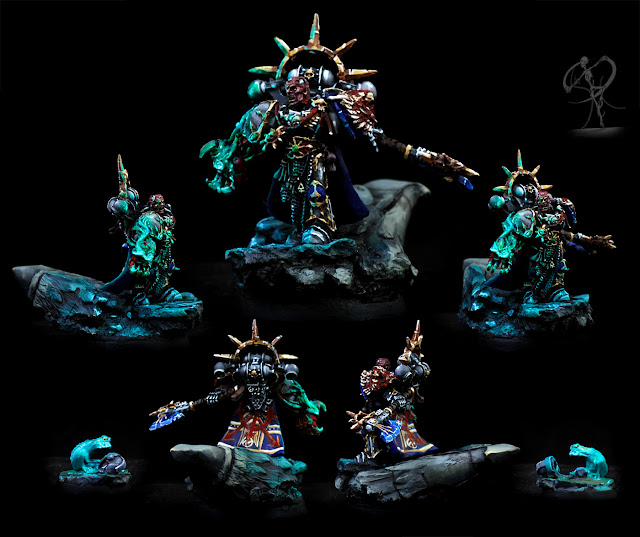 While the Astral Claws are easily my favorite chapter, and Huron is also one of my favorite characters, I think the stock model for Huron Blackheart is just... dumpy.

So, of course, I needed to do something about that. 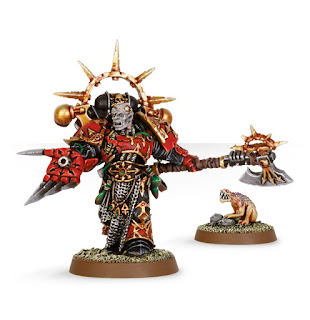 His ugly mug is really just an uninspired studio paint job, but I feel like his details, the modern Red Corsairs color scheme, his pose, and scale are all wrong.

The parts that thematically changed things the least were making his boots way bigger, so he's a little taller than a Marine, instead of embarrassingly short (which is of course further aided by his now broad and tall base) and similarly dropping his shoulders and putting spacers between them and his torso, to give him a greater bulk.

I also gave him a cape (honestly, not my favorite part of my design), and added a number of details to make him feel a bit more like a Marine captain/chapter master, like the tassel and cape (which also hid how thin he is by obscuring his profile).

I then messed around his signature Tyrant's Claw, which is just not impressive on the stock model. It looks like a regulation chaos lightning claw with some do-dads sticking out of it and a hole in the middle. I modified the fingers to more closely resemble his Forge World chapter master incarnation, and so it would look a bit more distinct. Still dissatisfied with how generic the opening looked, I also added some fire coming out of his fist, because I don't think it especially read as a focal point (after the sculpt below).

I still think the weapon deserves better rule, along with Huron himself (Why does a posthuman ex-supersoldier pirate king only have such absolutely generic weapons as power fist with a small heavy flamer? This is the symbol of his empire that operates out of space hell? And, what? Did he suddenly forget how to lead like a chapter master when he changed his title? Or did he previously rely on his good looks to inspire his marines? Why doesn't he have the full re-roll aura? ),* but I think that these modifications at least made him feel like the leader of one of the major chaos warbands. 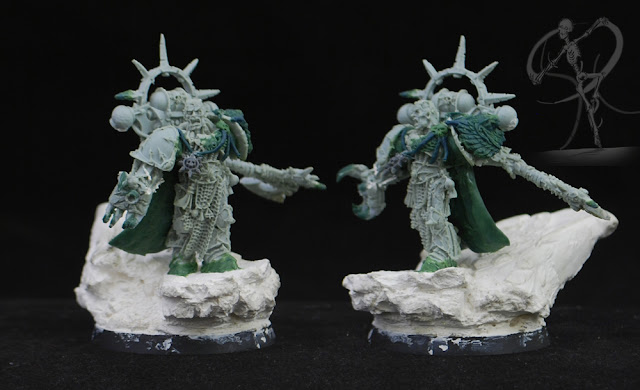 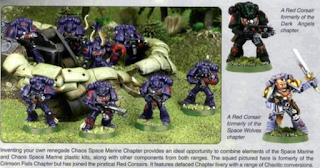 I'd say my biggest conceptual change is actually his paint job, however. I think one of the weakest points of modern Red Corsairs is their mostly homogeneous paint job. Maybe it's just because 3.5 was the height of my playing 40k, but I still prefer the Red Corsairs mostly in their original chapter colors. I think that it fits the heterogeneous space pirate theme, and fits the nature of the original chapter's downfall, i.e. Huron's pride.

I think that, rather than obscure his colors, Huron would flaunt them, a rich mockery of the power he once served and explicitly defacing his heraldry at the same time that he went to battle still in those colors, as a point of pride: he was and is still the last chapter master of the Astral Claws, regardless of whether the Imperium was too blind to see what he was trying to accomplish for humanity. Also, the only partial chaos color schemes, I think, helps distinguish the Corsairs from legion marines, especially since their red & black & gold now compete with red & brass (World Eaters), red & gold (Crimson Slaughter) and red & silver (Word Bearers). (I'm planning a lot of my rank & file Red Corsairs to have very little in the way of dramatic mutations and spikes, saving those for the most corrupted.)

And my above interpretation (rather, my ability to do so) is why I've always enjoyed the 40k setting, even when I've disliked GW or the rules: some combination of the breadth and depth of the setting really lets you run with it in a way that few do.


Finally: for indie fans out there who got the post title, I have a kinda hard time not thinking about good ol' Lugft singing those songs.

*Which is not to say that I want those upgrades for free: I think he's in a decent place, I just wish he cost more for a more powerful version. He's closer to a decent hybrid lord/sorc than the fluff, which has him as threatening as chapter masters.
Posted by Nick at 9:44 AM