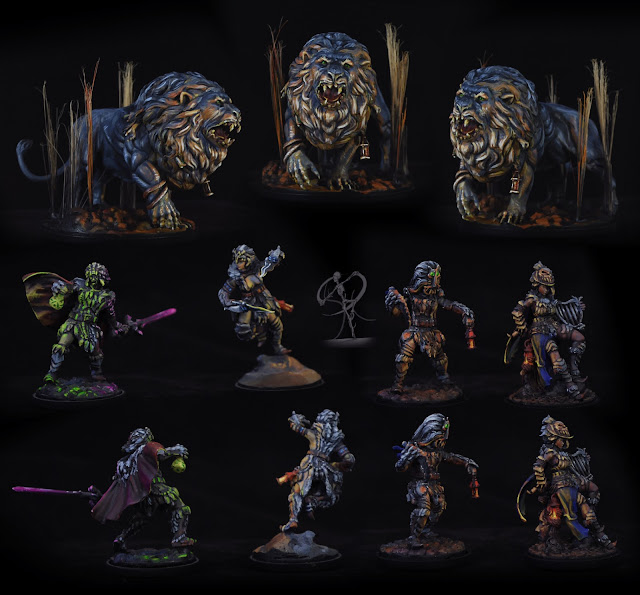 This guy is practically where it all started, for me and KD: the White Lion is the first monster I painted, and one of the earliest KD models I painted.

He was also the first that I converted, I believe the first base I cast, and one of the first I later revised, all of which I've done a lot in the years since. 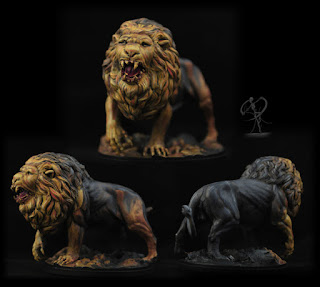 This version is the first lion I did, getting rid of those shark teeth that I still don't think read well (it's also one of the conversions I've done, so I guess others don't think so either), and the colors, while perhaps more realistic than my current lighting, were kind of subdued compared to how I operate now.

A lot of my choice to change is based on bounding around between a lot of styles, and of course there's some degree to which I improved (though this is always balanced by how much time I actually want to spend on 5 square inches of plastic surface area...), but one of the largest reasons for my change was how the game pieces look together.

While the above version and particularly the accompanying core survivors are all perfectly nice, the models, at a distance, didn't have a lot of punch. The natural darkness, natural light, and natural materials all ended up as a muddy mass, once you had a bunch of them together.

Returning to my current iteration, I decided that, since the slightly simian muzzle, the shark teeth, and the paws that were hands but that had claws all didn't read very well, I would add some details indicating the Lion's intelligence as reflected by some of its hunt cards, so he got bangles, an extinguished lantern, and a couple hands braided into his mane. While I was at it, I added some tall grass to give a sense of movement, and spent an inordinate amount of time adding fur texture to a model with really shallow detail.

The katar survivor above is still one of my favorites: the original version was Georgie, from our second campaign, with Beast Knuckles, who layed some memorable hurt on our first Watcher. The Twilight Sword survivor is one of my first more dramatic conversions, which I've just slightly revised. The Lion Mask one marks a more recent choice I've made to stop caring quite so much about gear, and just do something stylish. He's pretty stock, except that I've sculpted the mask into a head, rather than affixing it in front of one. Finally, the bard on the right is from the second Echoes of Death set, and one of my favorite recent survivors, one which is actually the impetus for updating the set. Though, ironically I think I could improve her paint job...
Posted by Nick at 11:11 AM