Starting Your Career as a Paid Killer - Gloomhaven Tinkerer, Spellweaver, and Game Sessions 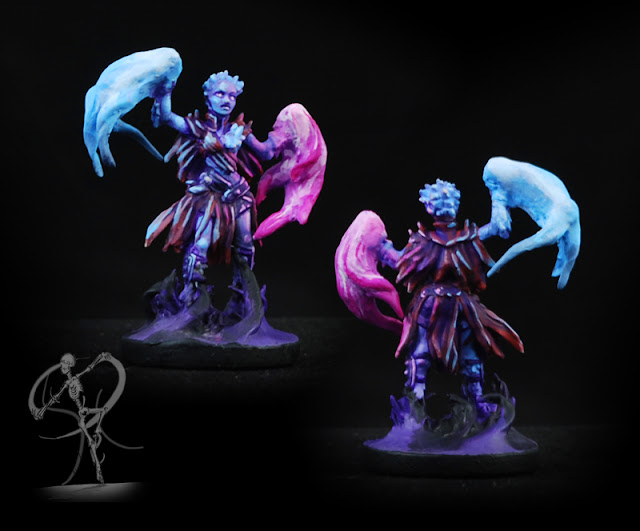 Trying a new game and a new aesthetic is always something of an experience. 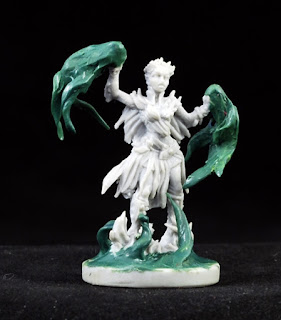 The Orchid Spellweaver was actually the second model I tackled, because its flames were a bit rough for me to figure out (I don't like the high-relief style the model comes with, and they were a bit flat). Turns out, my recent work on 40k's Dark Eldar gave me a pretty decent idea for how to go about sculpting and painting magical fire-ish effects, and I used a lot of those techniques on the Spellweaver.

I tried to stick pretty close to the flavor and art of Gloomhaven, and probably the biggest thing I've played with is not actually using black for anything but the darkest shades: only the tips of the stuff on the base actually have any black in them, since I was going for a hypersaturated look.

The Tinkerer didn't need the same elaborate treatment; I mostly just turned his head and repositioned his arm, with a little wisp of stuff coming off his flask to match the art. 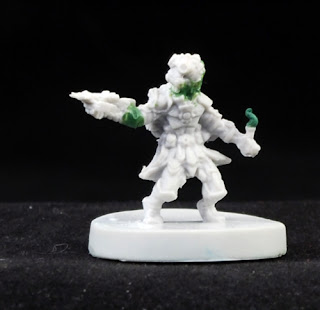 The Quatryl Tinkerer was the first mini I painted for Gloomhaven, and I decided to try to mimic the board style with flat painting, rather than what I tend to do, which is sculpt some some flagstones and then paint over them. 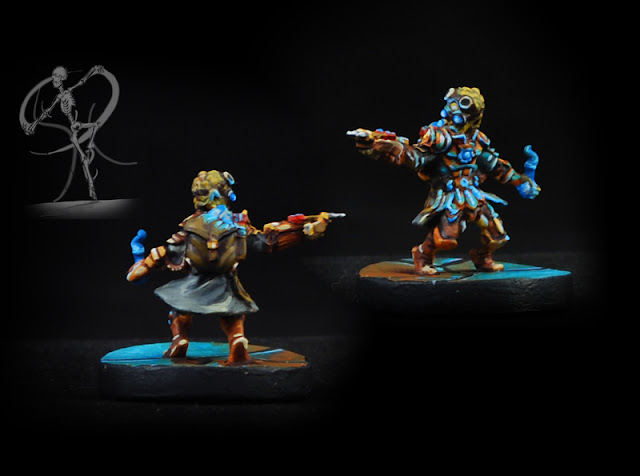 Campaign, part 1
This will inevitably have some spoilers so it doesn't read "In a level, there was a room with guys, then we completed the thing we were supposed to do," which would be completely incoherent and boring.

However, in keeping with GH's obfuscation (which is a pretty neat mechanic and is teaching me to maybe tolerate legacy designs), I'm trying to keep spoilers on the light side. I'll be using italics for story stuff that might be more spoilery.

This will probably be best read either as someone who's already played, or read by players who aren't immediately going to play (so my vague spoilers aren't particularly fresh in your mind when you get to the scenario).

A lot of this will, therefore, be about the experience rather than the details.

I'll vaguely describe strategies, emphasized with bold my group found worked well (or didn't), so, if you're browsing this for tactics, it might also be useful. Also, hopefully this will keep things interesting enough without spoiling details with describing more memorable surprises.

I'll also be using location names, not numbers, to keep the map a little more obscured in theory.

Unboxing
After getting over the excitement of the giant pile of parts that make up the game, and reading the rulebook, and punching and sorting tokens we'd need, and looking at the classes a little (and probably some other stuff... this game certainly could have used a clever introduction scenario to make it feel like less of a chore to start playing), we finally decided on how to start.

We decided, since it was such a sprawling campaign, to do a dry run through the first scenario, partially in case anyone wanted to change classes after getting a feel for the game, and not start behind.

Practice session! Black Barrow
We ran with the suggested starting gear, playing the Cragheart (earth elemental), Spellweaver (sorceress), Mindthief (a "Vermling," a weird little cross between a gnoll, a GW Skaven, and a ghoul, with a little rogue and vampire mixed in), and I ran the Tinkerer (classic, except some sort of tiny ape alien looking guy, instead of a more typically human diminutive race).

So, we went to the Black Barrow to root out the goons we were told to deal with

Being the first scenario and the first time we'd played, things were pretty messy, but, by the middle of the game, we'd figured out a few things, including pacing (my early conservative choices seemed to have paid off) and how to actually do a player turn.

Two of our players ran out of cards in the last room, while the other two of us hung on with a bit of health. Despite a terrible start (damage randomization was definitely not in my favor for the first few rounds), I ended up in the best shape, and the two of us who survived had a little more fight left in us.

Things were pretty cool. I wasn't immediately sold, but I was pretty happy.

Mission 1: Black Barrow (this time for real); session 2
This time, we actually started off the campaign. We all ultimately decided we were happy with our characters, now named Urd Opaleye (our Cragheart), Janett [sic.] (Sorceress), Gezelda (our Mindthief), and Archibald (our Tinkerer), of the Gloomhaven Guppies!

Being mercs, we got our first gig with our new boss, geared up with our suggested starting supplies, and then had a run-in with some drakes that messed up our starting stats for our first mission raiding some bandits (this time, for keeps).

Oh, also, we started by using Sid Rain's lovely digital version of the map: it's a great resource for those of us who don't want to use destructive game elements. Since we're getting such use out of it, the least I can do is include a shout-out link.

We tried pushing into the second room before killing as many guys as last time. That, plus not understanding how line of sight worked (because, like every grid-based game with LOS, LOS could have been introduced with some more clarity or emphasis), was what lost us the scenario, since a couple of us needed to burn through some cards defensively.

Urd and Archibald got to the end and, with some decent coordination, we managed to get kill every goon except one that held on with one health when I ran out of my last card. Choosing a different order on an AOE would have done it, but we were just shy.

Honestly, we considered fudging it, since we'd won the first time, but decided to start things off right, and get some practice.

Oh, also, we got the treasure, when one of our guys who was going to die leapt to get it.

I'd pulled ahead enough in gold to actually be able to buy something, but decided to wait for what I really wanted (more movement).

Apparently, you can't trust those bandits to keep their word: We got KO'd but they didn't even grab our cash back!

Mission 1.1: BB, take 3 (3)
This time, we didn't start with any penalties, but did start with some bad luck, which evened out to around the same.

Again, our two lighter characters were pretty much overtaxed by mid-scenario. Eventually, we won with our Cragheart pulling off a narrow victory, with just a tiny bit of insurance and the rest of us out.

Being reasonable adventurers, we decided to go ahead when we found some animate skeletons at the basement door.

Mission 2, Barrow Lair (4)
One of our group pointed out that the description for the Bandit Commander mentions his eyes, but the illustration only has one. So... uh... moving on.

When we saw the boss's high health, we were pretty daunted. I burnt a lot of cards to slap him with burning and poison really early, and then we had some solid luck (only one null damage was drawn while we targeted the boss and we got at least a couple opportune x2's on the right attacks), and we cruised through the boss, only allowing him to open two rooms. We felt like concentrating hard on him really won us the scenario. Only Janett got KO'd, and that was only due to a planning error, and not actually being overtaxed or wounded down etc.

Then we got options, including leveling up (two of us hit level 2), enough money to buy stuff, and now 3 levels (2 + a bonus) from which to choose.

Mission 3: Inox Encampment (5)
After getting some loot, we decided to be nice to some sentient crab people because they were sentient, before we went off to fight some forest-dwelling sentient beings definitely pillaging bandits.

Well, we kind of ran in there. That didn't work very well. Some nasty early damage didn't help, and then we didn't have enough fight to deal with the attrition. We got within 4 kills of winning, so, not very good. At least we got the unique loot. (This seems to be a pattern, for us.)

Mission 3.1: Inox Redux! (6)
Again, after being KO'd, we ended up back in town, and we won a pie eating contest, which wasn't necessarily the best for our adventuring. It hurt worse than "being beaten within an inch of our lives" part.

Again, playing more conservatively worked better. We pulled back to one flank, which gave us enough time to wreck waves in isolation, and this time, we won with no one being very heavily taxed. Also, our last player caught up to level 2.

Mission 4: Diamond Mine (7)
After some debate over our next scenario, we eventually decided to fight some rat guys to get us some loot! They seemed sneaky and evil. Also, diamonds seem like something fun to fight over. Despite our boss clearly being shady, eh, our profession is being paid not to care... also, it's being guilt-tripped by flavor text, I guess.

More mechanically speaking, I wanted to see what it was like to fight light swarm enemies (which I expected would be what rat men fought like).

On the way to the mine, we caught a cutpurse, coincidentally also a rat guy, and then helped out some Inox (I guess from a different tribe than those we just beat up... seems like they don't have much racial solidarity, since our boss's goons were the same species. So, we ended up a little better off, this time.

Turns out, our group is really, really good at slaughtering little guys. We didn't really have a strategy past that.

Two of our guys hit level 3, and we variously got and narrowed down scenario choices.

Mission 5: Gloomhaven Square (8)
Everyone decided that, while we were mercs and our boss is clearly a bad person, that isn't quite the same as trying to raise an army of undead using cult magic, which seems pretty explicitly and undeniably evil... I mean, merchant-y. So, we didn't really feel like pushing further down that path.

So, we got some allied city guard, which was a neat way of making the fight bigger, though a little bit clunky (dealing with a lot more AI than active player characters isn't my favorite, and this is the first time when AI types outnumbered player characters for us).

This was a pretty epic fight, where again it mostly felt like pacing our actions was what allowed us to move along well, and we've been getting better at pacing how quickly to push into a room while enemies are still around in the current one. Well, that, and a very lucky early turn that put a bunch of baddies in a poor state certainly helped out.

The game was moderately close, but I felt like we were solidly in control of the situation most of the time. I'm pretty sure we couldn't have kept up if we'd been trying to manage the goons over killing the boss outright, so it's cool that it took a bit of strategy. Good thing we were so range-heavy, since that made it quite a bit easier to deal that much flexible damage.

So... we beat Jekserah, who had a genuinely undead-summony boss feeling, which was pretty neat, followed by our presumed new boss coming in and robotically listing some stuff we could do next... it took the wind out of our collective proverbial sails a little, but now we felt like we'd completed the first major (minor? I'm not sure how long the game's supposed to be) arc of choices.

Presented with something like a half-dozen scenarios, we had a lot to consider before our next session.
Posted by Nick at 10:08 AM