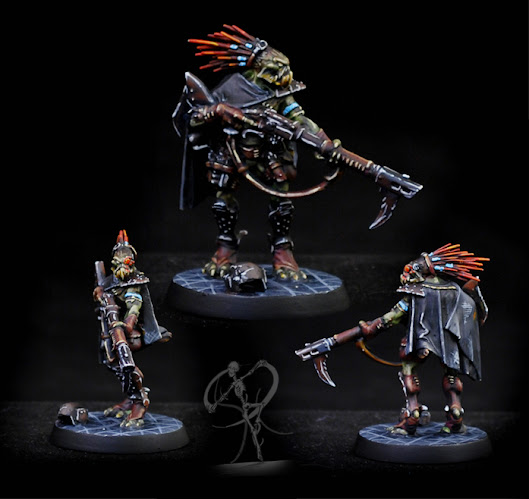 I have a soft spot for Kroot with capes. There are probably around a dozen kits and collections I regret parting with, and one of them is my little Kroot collection led by Anghkor Prok from one of the few Gamesdays I went to. I played Tau right when they very first came out, and I always liked the Kroot line (more than the main Tau one, especially in the early days) which has unfortunately gone nearly unsupported: one ancient plastic kit, three equally ancient metal kits (one of which didn't need a model), two variants on an Inquisitor-scale model, and a little Forge World stuff. More than that, I've also had a soft spot for underdog mercenaries, rabble, bandits, or otherwise independent forces for as long as I can remember, from Warmachine mercs to Malifaux Outcasts to Astral Claws/Red Corsairs, to any number of post-apocalyptic settings including Mordheim (another regret). I'm going to be personally honest here: I think this sensibility might be the most typically American part of my lifestyle, very much influenced by the ideology if not always the aesthetic of Westerns, etc.

So, along comes Dahyak Greekh, and I think he's pretty much the perfect Kroot, and one of my favorite mercenaries. I think he captures pretty much every cool aspect of the Kroot, and if that subfaction ever got rebooted in this style (yeah, almost certainly not), I'd be sorely tempted to start them up again. But, for now, I just had a lot of fun painting this one dude, getting a rare nostalgic experience and painting a model that would have certainly been a centerpiece in my old high school collection.

Also, there's some beastmen. I can't go on about them nearly as much, but I still did enjoy these dudes because they, too, came from a period in 40k when GW was actively encouraging conversions that seemed more about weird options than about selling the most recent load-out GW had sculpted. (Yeah, I know it's all business, but the current era of official designs for everything is rather tiresome.)